Behind the scenes on the Fluidity shoot

I thought I’d put up a little behind the scenes stuff that were part of the photoshoot that produced the Fluidity images. Here’s four shots, with no post-processing, as we were getting ready to administer large amounts of the pink stuff all over Kira. These are four consecutive shots took 28 seconds. Fun times!

Shopping at the Salvation Army

Shooting with John Jebbia and Lory

I had discovered that John Jebbia was moving back to Arizona in a few days. He lives close to me but we had never met in person although we had interacted many times on various fora. We talked about getting together for lunch and he had a better idea – let’s do a shoot together. He had something set up with Lory (more on Lory later) so we met at Sunset Beach and the three of us worked and got our story straight since we were shooting without a permit! 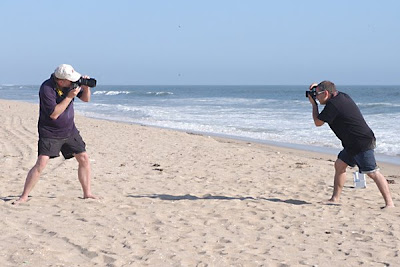 Here John and I are working out just who can take the better photo. It turns out that this procedure didn’t help answer the question. Lory took this and I think got a kick out of being the photographer for a change!

While John was shooting a silhouette of Lory, I decided to shoot a silhouette of the both of them. You can’t make out who the heck it is so you have to take my word for this. Since they are unidentifiable the photo then becomes “artistic” which is good I guess!
After the shoot we met Lory’s boyfriend at a sushi place. We all had various sushi dishes and much fun was had talking about all kinds of things. Actually, I had a steak. That was good for me because steaks are cooked and sushi is just disgusting. But that’s neither here nor there as far as the creation of the photos goes!
I hate to see John move back to Arizona – it’s always fun to have local photographers to cause trouble with.

Ashley – Great model I worked with in Winnipeg

Ashley was a model I met on modelmayhem. I was lucky to find her – she was easy to work with and has a range of expression that is hard to find. We shot a bunch of sets in about 3 hours. I think she would love southern California! I’ll have more to say about my shoot with Ashley later, but I wanted to get her on the books.